Official support of Kotlin on Android

The last Google I/O 2017 like you know the Android team announced the official support of Kotlin programming language. Kotlin is a JVM based object-oriented language that includes many ideas from functional programming. It is a brilliantly designed, mature language that will make Android development faster and as enjoyable and fun as possible.

Kotlin was created by JetBrains, the team behind IntelliJ, which is the base for Android Studio. Kotlin team started the journey 6 years ago, and 2 years ago the Android community and industry around the world started to experiment with this language. Companies like Expedia, Flipboard, Pinterest or Square are using Kotlin in their production apps already. Kotlin official support by Google is a very good news and a chance to use a modern and powerful language. It’s another way to create Android apps, that will help solving common headaches such as runtime exceptions (NPE) and source code verbosity. Kotlin is easy to get started and it has already been adopted by several major developers. It also plays well with the Java programming language; the effortless interoperation between the two languages has been a large part of Kotlin’s appeal can be introduced gradually into existing projects, which means that your existing skills and technology investments are preserved.

Getting started With Kotlin

If you are interested to learn more about the Kotlin programming language, I added some resources that can be useful.

Resources to start with Kotlin on Android

We know that writing quality software is hard and complex, it is not only about satisfying requirements and features. For some time, the community has been exploring various architectures and patterns to create better apps. Google had nothing on these topics until one year ago when they released Android Architecture Blue Prints a collection of samples to discuss and showcase different architectural tools and patterns for Android apps created by different developers round the world.

Couple moths ago, Google Launched the Android Architecture Components Framework. It is a set of libraries and guidelines that will help you design flexible, testable and maintainable apps, reduce boilerplate code, manage your UI components lifecycle and handle data, helping to create Android applications using separation of concerns (SoC).

The libraries are available from Google’s Maven repository https://maven.google.com only add the artifacts that you need in your project other advantage is can be used standalone.

Is an abstract class designed to store and manage UI-related data so that the data survives configuration changes such as screen rotations, which means that our activity or fragment no longer needs retaining the data state as the ViewModel takes on this responsibility basically when you rotate a device his Observer is connected with the same ViewModel.

You can see the code below how create a ViewModel although architecture components provides an observable called LiveData which has an important role into the ViewModel because is a data holder class that can be observed within a given lifecycle.

It’s the way to define our database basically it should be an abstract class that extends RoomDatabase and with annotation @Database to define the list of entities and expose the list of data access objects.

In the sample I created RoomsCurrencyDataSource to storage all world currencies.

This component represents a class that holds a database row. For each class with annotation @Entity a database table is created to hold the items. (Use the annotation @ColumnInfo to customize the name of a field.)

This component represents and define the contract to access on Database, should be an interface with annotation @Dao. Create a query is easy there are some already defined annotations in which you only have to create your SQL query like @Query, @Insert, @Delete.

I know there are a lot good libraries like realm that can help you with all this stuffs but SQLite was released since android 1 and works in all devices is a tested technology.

The following diagram shows all the modules that Google recommended and how they interact with one another: 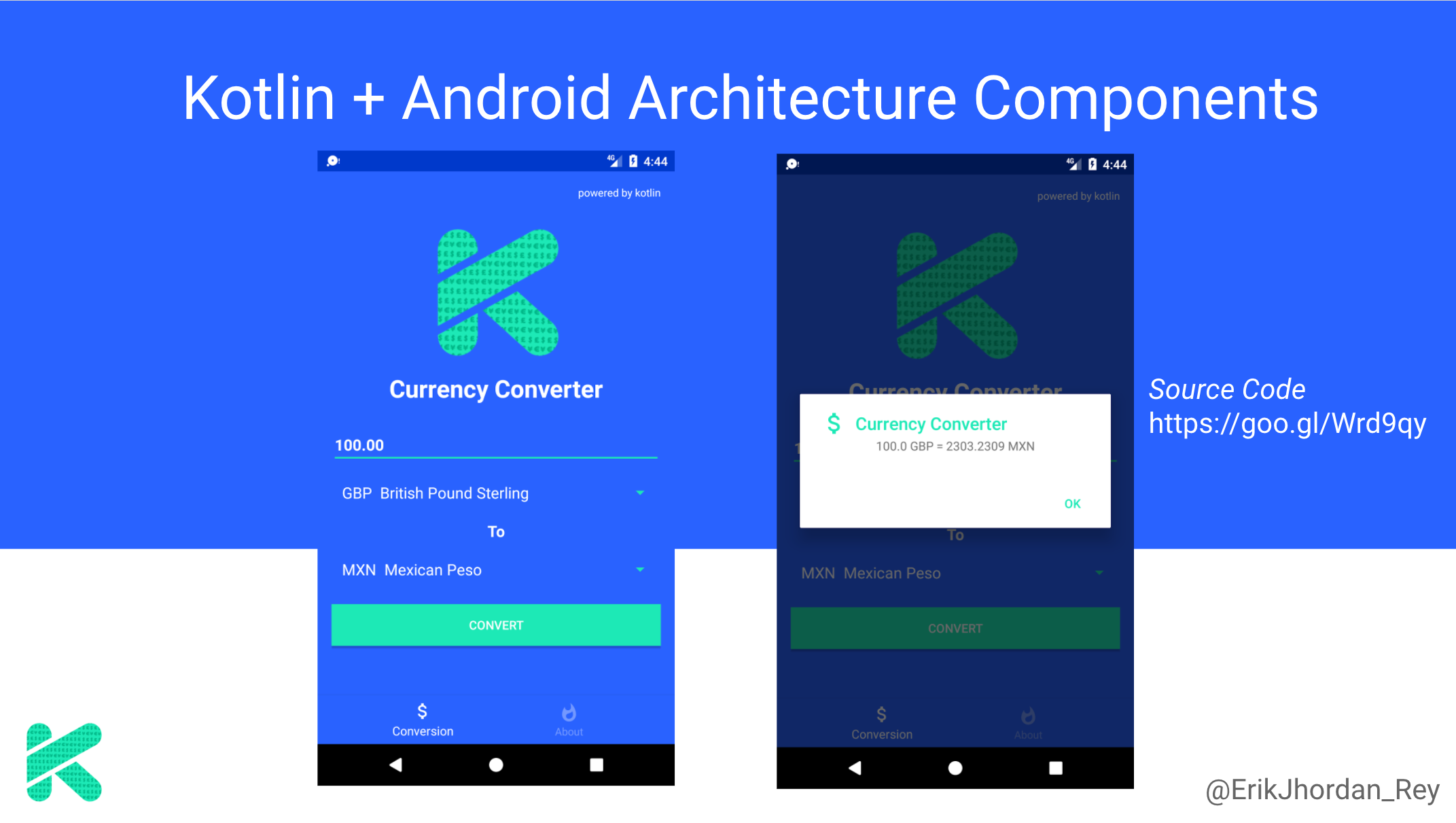 “Truth can only be found in one place: the code. by Robert C. Martin”